Police Commissioner Soumendra Priyadarshi told mediapersons that the cops have also seized two bikes and five mobile phones from the possession of the arms smugglers. The mastermind of the racket is Saumendra Sahu alias Magu of Thattari Street in Chauliaganj who is accused of bringing arms and ammunition from Munger district of Bihar and supplying them to criminal elements across Odisha, Priyadarshi said. 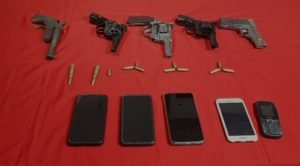 Three other accused who were arrested in this connection are: Kalia alias Sheik Sajid Ali of Krishnanandapur in Tirtol of Jagatsinghpur district, Sudarshan Mallik alias Timina under Biridi Parvatipur police station and Badal Jena alias Denga Budha of Basua Jena Street in Shankarpur.

The city police have seized 59 illegally manufactured guns along with bullets from Bihar in the past eight days. The police also suspect the involvement of the four accused in several other criminal activities in the state.

In view of the spurt in criminal activities during the festival season, the police have adopted a zero-tolerance stance to make a clean sweep of of crime networks and kept a close watch on smuggling of arms across the state, the commissioner added.

500-Seat Auditorium Comes Up At SOA In Bhubaneswar

Centurion University Near Bhubaneswar Takes Up Skill Training Of Candidates From…

‘Why So Serious,’ Netizens Ask Sabyasachi About…

This Carpenter Would Have Lost His Thumb If He Had Reached…