Bhubaneswar: The Bharatiya Janata Party (BJP) on Monday announced the names of core committee members of its Odisha unit.

The BJP released the list on recommendation of national president of the party JP Nadda. Almost all prominent leaders of the BJP in the state figure in the 17-member list. 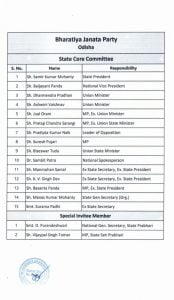 Interestingly, the party’s firebrand woman leader and Bhubaneswar MP Aparajita Sarangi has not been included in the core committee. The omission of Sarangi, who has been vociferous in targeting the BJD government in the state on various issues, has raised eyebrows among her followers.

Selection Not Election: 3 Major Parties Decide For Consensus Candidates In…