Craft Spirits Blend: To Shake Or To Stir?

A martini: Shaken, not stirred.

It’s a line from Ian Fleming’s book, which became iconic after being included in the first James Bond movie ‘Dr No’.

I am yet to meet a bartender who doesn’t know this line – even if he hasn’t heard of James Bond. It is a reference given on the first day of Mixology training. I am yet to meet a mixologist who has actually tried a shaken martini. The neo-cocktail culture is changing, it’s getting more demanding. Mixologists are stirring up a big storm with ice in a glass.

The ubiquitous quote “I was born talented… education ruined me” seems to apply to those who have studied hospitality, a part of which is bartending, an advanced stage of which is now called mixology. The term ‘mixology’ might seem new but it has been there since the mid-19th century. Its importance has been recently restored by bartenders across the globe by experimenting skilful concoctions.

‘Mixologist’ is heard quite frequently these days and almost with as much regard as wine connoisseur – Sommelier. So who is a mixologist and what exactly is mixology?

‘Mixology’ is defined as the ‘art or skill of preparing mixed drinks’, while a ‘mixologist’ is the artist who masters this skill. This skill is focused entirely on mixing drinks of various tastes, densities, textures, temperatures, etc. to create a drink that will tantalize a palate.

A mixologist has in-depth knowledge of various types of liquors, liqueurs, wines, beers, sodas, syrups, sours, sugars, honeys – even teas, coffees and cocoas. His job is to keep experimenting with these liquids and flavourings to create drinks which not only appease the palate, but are visually stunning too – in addition to knowing classic and popular cocktails and mocktails thoroughly.

Mixologists also often take into account the predominant cuisine or culture or theme of a bar or restaurant and design drinks pertaining to those.

That’s where the distinction between a mixologist and bartender comes through clearly. A bartender is one who ‘tends the bar’, that is, he or she looks after every aspect of running a bar from making drinks, to serving them, entertaining guests, figuring out costings, keeping stores updated (of drinks, glassware, snacks, garnishes, etc.) – and sometimes even selecting the music. 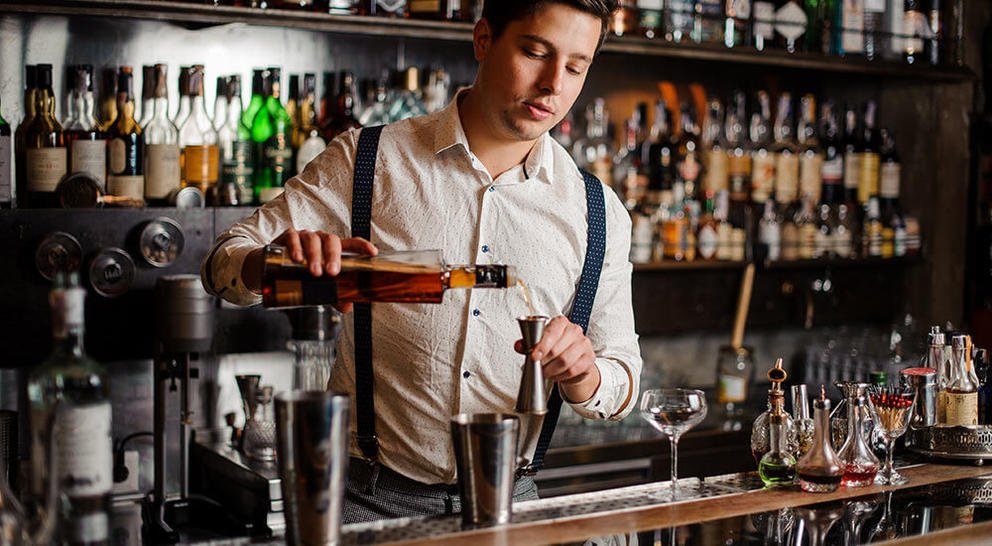 If one keeps this factor in mind, the job of a bartender is much more challenging than that of a mixologist. But there’s another side to this too. A bartender can sometimes get away by sometimes only being able to make classic cocktails brilliantly – a practice seen in many bars. He doesn’t generally have to suggest a cocktail to go with a particular kind of food whereas a mixologist has to keep that in mind.

In fact, a bartender more often than not makes drinks by following a mixologist’s recipe. In today’s rising trend of standalone bars, many mixologists are seen broadening their horizons in terms of conversation and general knowledge, and take on the role of bartenders.

In the present scenario, mixologists are getting scientific and experimenting with molecular gastronomy to create drinks which are not just in liquid form, but in mousse, jelly or even caviar form. They are taking the cocktail scene to a whole new level.

Though it looks easy on the eyes, it is a skilled art and brings forth a story with each sip. It’s not just mixing drinks and getting the flavours and quantities right, there is science and skill behind preparing these drinks. Every mixture is a beautiful canvas for these cocktail connoisseurs.

Lot of importance is given to the aesthetics of presentation. Their magic lies in offering full flavours using fresh ingredients and at the same time presenting the authenticity of the old favourites in a unique way.

So how does one become a mixologist? The trick is to begin experimenting with a sweet and sour balance – as those two flavours are readily available in our kitchens. Think of something as simple as honey, lemon and water. All it takes is a few tries before you know exactly how much of each element is required to get a perfectly balanced flavour.

Once you get that sense of harmony between the ingredients, you automatically achieve the balance — which is what you need at the heart of every drink. Then you can raid your cupboards and refrigerator, and experiment with the various syrups, colas and even jams and jellies.

Try making different flavoured light teas, and cool them to make the body of your drink. We in India are lucky, given the abundance of spices we have. Try using spices like saffron, pepper, cinnamon, cardamom, nutmeg to add another layer of flavour to your drink. When using spices in cocktails or mocktails, always follow the thumb rule of less is more. And, finally, use lots of ice.

Contemporary cocktail-making is one of the most creative and lively professions in the hospitality industry. Only a skilled professional can make a drink look fancy with the perfect combination of art and science. This creative profession is definitely here to stay as people always want to try new things and move beyond the classic cocktails. That’s the reason why there is a sudden demand for jazzy cocktails and it’s become quite popular among patrons.

If you’re wondering why I mentioned education at all, it’s for a simple reason. Sometimes, when we don’t know the rules, we tend to think out of the box without the slightest bit of hesitation. When we study something, we unconsciously play by the rules, sometimes plateauing our own growth and creativity. I mention this because it makes me sad to see some really talented mixologists and bartenders not being able to do full justice to their trade, either because they play strictly by the rules, or their employers do. That’s why James Bond is unforgettable.

Mixology has influenced the way people drink in bars and has elevated the cocktail drinking culture. The demand for this profession has increased so much that now there are institutes which teach you the science of mixology.

In India, this trend has already caught up and mixologists are doing very well in the industry. If one can think out of the box and have the flair to create quirky concoctions, then this is the perfect profession.

For the road: Mixology is not just perceived as shaking or stirring, it is termed as a skill that combines art and science beautifully.

Mumbai Drug Bust Case: Why Aryan Khan Should Not Be In Jail?

Get Fans Back At Kalinga Stadium Cautiously, With An Eye On 2023 World Cup Hockey

The Disease Of Odia Self-Belittling