Bhubaneswar: Coastal districts of Odisha have been asked to remain alert in view of the forecast of cyclonic storm Jawad, which is likely to reach Odisha- north Andhra Pradesh coast on December 4 morning.

Addressing media persons here on Thursday, Special Relief Commissioner (SRC) Pradeep Jena said IMD will give a clear picture on Friday about the position, path and movement of the cyclone. However, the government prepared in advance and 60 ODRAF, 17 NDRF and 171 Fire Service teams have been kept ready for rescue and relief operations.

The coastal belt and adjoining districts will see rains from the midnight of December 3. The rainfall activity will intensify further as the cyclone moves closer to land on December 4, he added.

Giving details about government preparedness for the cyclone, Jena said the state is well prepared and all the coastal districts have been asked to remain alert.

The fishermen have been asked to return to shore by Friday morning while fishing has been banned in Chilika and Bay of Bengal on December 3, 4 and 5.

Farmers have also been asked to harvest paddy crops while direction has been issued to evacuate people from low-lying areas.

With the wind speed likely to be around 100 kmph, the impact on pucca houses is likely to be very less and those staying in kutcha  houses will be shifted to safer places. 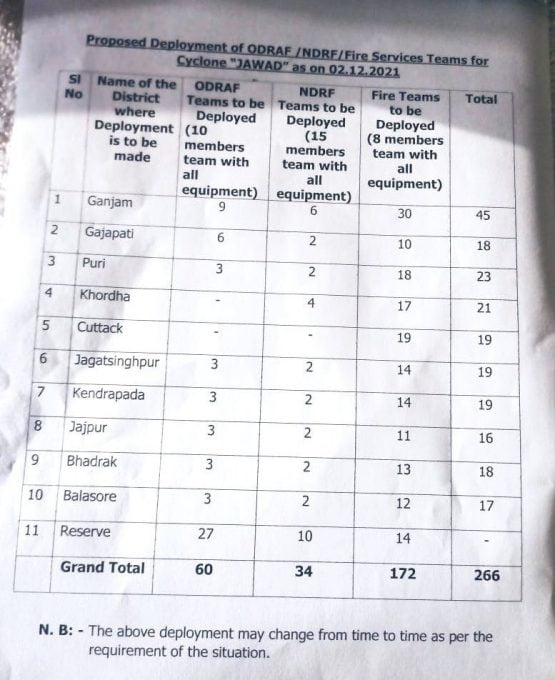 Those staying near beach areas will also be shifted and COVID norms will be strictly followed at cyclone shelter homes.

The India Meteorological Department (IMD) has issued ‘Red Warning’ for heavy to very heavy rainfall in some parts of Odisha on December 3. Ganjam, Gajapati, Jagatsinghpur and Puri are very likely to face the maximum impact of this cyclone with heavy rains and strong winds, said Jena.

At present, the system lies as well marked low pressure area and is likely to intensify into a Depression in the next few hours.

Daringbadi Coldest In Odisha at 10.5°C; Check Where The Mercury Dipped Below 15°C

CRPF Havildar Kills Self With AK-47 In Odisha’s Nuapada