JeyporeBhubaneswar
By OB Bureau On Sep 12, 2021

Jeypore: Within hours of the arrest of a Maharashtra head constable smuggling ganja at a railway gate in Barpali in Bargarh district, Jeypore Town Police Saturday intercepted a car carrying marijuana worth lakhs of rupees. 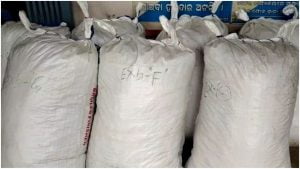 On a tip-off the police intercepted one of the cars coming from Malkangiri towards Jeypore at Yole Dam Square while the other vehicle managed to flee the spot along with the consignment.

The police arrested three persons hailing from Malkangiri and seized 180 kilogram ganja worth Rs 20 lakh and two mobile phones from their possession. The smugglers are reported to have revealed that the consignment was being transported to Bhubaneswar. Jeypore sub-divisional police officer Abishesh Behera suspected that ganja smuggling could have some inter-state connection.

IMD Issues Flash Flood Alert For Odisha, Predicts Depression Over Bay Of Bengal In Next 12 Hours