Jaipur: Speculation has been rife that Katrina Kaif and Vicky Kaushal are getting married on December 9. Several media reports have even suggested that the big fat wedding will take place at Rajasthan’s Six Senses Fort Barwara resort.

But there has been no word yet from either the bride or groom’s side.

However, an official intimation from the Sawai Madhopur district administration confirms that the wedding of the Bollywood superstars is, indeed, set to take place.

A letter from the additional district collector of Sawai Madhopur — informing police, district officials, Fort Barwara officials and event managers of a meeting to discuss steps and measures to be taken for the mega wedding — has gone viral on social media.

The order, issued by Suraj Singh Negi on December 2, states that a meeting will be held on Friday to discuss law and order arrangements, crowd-controlling measures and other security arrangements for the high-profile event to be attended by several celebrities. 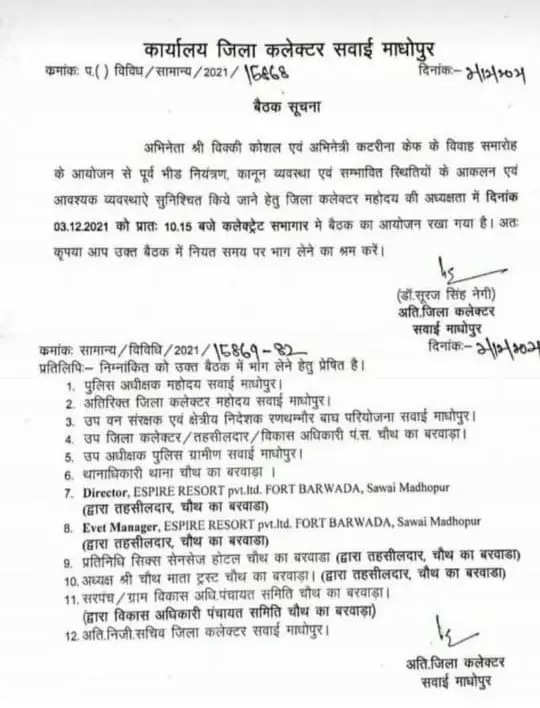 According to one report, Katrina and Vicky will fly to the wedding venue in a chartered helicopter to avoid the paparazzi.

Another report suggested that the guests will have to follow a no-photos NDA clause will be given secret codes to avoid their names from getting leaked to the media.

When Kapil Sharma Tried To Join BSF And The Army

Dhanush & Aishwaryaa Not Divorced, Actor’s Father Terms It As…