Cuttack: The MGM OCL T-20 League Cricket Tournament, jointly conducted by the Odisha Cricket Association (OCA) and the TCM, took off at the Barabati Stadium in the city on Sunday.

Member of the All India Senior Selection Committee of the Board of Control for Cricket in India (BCCI) and former Odisha Ranji player Debashish Mohanty inaugurated the tournament in presence of OCA president Pankaj Lochan Mohanty and secretary Sanjay Behera. 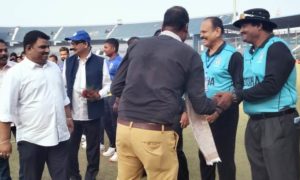 According to the fixture, Odisha Panthers were pitted against Odisha Pumas in the inaugural match which began at 3.30 pm while Odisha Tigers will meet Odisha Cheetas in the second match scheduled at at 7.30 pm.

Apart from the four aforesaid teams, the Odisha Jaguars and Odisha Lions are two other teams participating in the tournament which will conclude on January 21.