Mardal, Odisha’s ancient and indigenous percussion instrument is an integral part of Odissi music and dance traditions. Ironically, it was being treated as a mere accompanying instrument for decades while its counterparts like Pakhawaj, Mridanga and Tabla were established as independent instruments.

If Mardal has got global recognition today, even though belatedly, the credit goes to three stalwarts – late Guru Banamali Moharana and his two distinguished disciples, Dhaneswar Swain and Sachidananda Das, who are well-known gurus in their own right today.

As a performer, rhythm composer, trainer, and researcher of a high order, he has been instrumental in establishing and popularising Mardal as a solo instrument through several of his initiatives through Mardal Academy and Vadya Vani Gurukul in Bhubaneswar.

The world’s first and exclusive Indian music television channel, Insync, aired a special programme on Mardal recently. It was the first of its kind in the history of this ancient instrument and Guru Dhaneswar Swain was invited to present it. 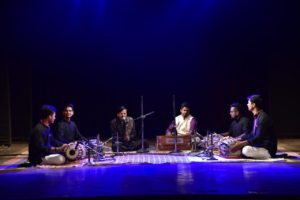 Excerpts from an interview of Guru Dhaneswar Swain with OdishaBytes:

How old is the Mardal tradition?

It is as old as the Jagannath Temple tradition of Puri. The temple has a special service called Madeli that is rendered by Mardal players. Mardal playing was quite prevalent and popular in almost all the villages of Puri region. The instrument has been an integral part of the age-old Mahari, Gotipua and Sahijata traditions of Puri apart from Odissi music and dance traditions.

Why did you wish to be a Mardal player?

I was born and brought up in Nahantara village near Nimapada in Puri district. As a child, I was fond of music and acting. I used to sing regularly and act at times in the plays staged in our village.

I was introduced to Mardal at the Bhagabat tungi  (the village community centre). I was charmed by the beats of the instrument that my cousin used to play at the tungi. I aspired to be a Mardal player since then.

Did the family support your decision to be a Mardal artiste?

I did not belong to a family of traditional artistes. But my father was quite fond of cultural activities and was also a patron of arts. He even acted in the plays staged in our village.

However, my father was keen on the education of his children. So, initially, he wanted me to go for higher education after my matriculation. When I decided to study Mardal at Utkal Sangeet Mahavidyalaya in Bhubaneswar, he was sceptical about its future as the course did not offer a secure career. But he did not stop me from going ahead with my choice.

How did USM shape your future?

The seven years of struggle as a student in Bhubaneswar amidst financial hardship was worth suffering.  Here, I had the rare fortune of being trained under a living legend like Singhari Shyam Sundar Kar and exponents like Mahadev Rout and Banamali Moharana.

While 12 students had enrolled in the Department of Mardal, only two of us could complete the Master’s degree from the Mahavidyalaya. This achievement highlighted me as a talent among the large number of aspiring and struggling young artistes of my generation.

USM was a great and glorious institution then with as many as 14 departments that included Hindustani, Carnatic, and Odissi genres of music – both vocal and instrumental apart from departments of Odissi dance and drama. So, we had a galaxy of exponents as faculty besides a large number of talents from different fields of music, dance and drama, many of whom became great masters of their field in the future. Growing up in such an environment laid a solid foundation for my career as an artiste.

You served your alma mater Utkal Sangeet Mahavidyalaya as a faculty for 30 years. How was the experience?

As I have already said, USM is an institution of great glory and legacy. I was fortunate to study here and become a faculty member later on. The experience was quite enriching, both for me and the Mardal tradition.

Since I was rooted in the tradition, I could observe that there has been an excessive influence of Hindustani music pattern, Tabla in particular, on our teaching style in the institution. So I tried to redefine certain aspects of Mardal playing and teaching using the typical Odissi music and Mardal patterns as was prevalent in the villages.

Initially, my initiative was misunderstood as a misadventure by the exponents of that time. But I trusted my conviction and continued to develop a complete codification, grammar, and terminology as per Odisha’s indigenous percussion tradition.

My colleague, Sachidananda Das was my constant collaborator who strongly believed in me. Along with him, we succeeded in highlighting Mardal as a solo instrument.

When and how was Mardal presented as an independent instrument?

The credit goes to late Odissi Guru Gangadhar Pradhan who used to host the annual prestigious Konark Dance and Music Festival at Konark. He was a great Mardal player and a visionary arts promoter. Way back in 1983, he had insisted that we (Sachidananda and I) stage a jugalbandi of Odissi Mardal at his festival.

This was a historic occasion as several exponents of music and dance including Bhubaneswar Mishra and Umesh Chandra Kar were present. Our concert could convince them that Mardal has all the potency of being presented as an independent instrument. Since then, we have not looked back and explored all possible opportunities to promote Mardal as a solo percussion.

You were the founder-secretary of Mardal Academy. What was its vision and to what extent has it been achieved?

The Academy was established in 2001 with our Guru, Banamali Moharana as the head. The vision and mission was to bring all Mardal artistes of the world together to celebrate the strength and beauty of the instrument and its legacy.

We take immense pride in our achievements. By bringing all the Mardal artistes of the world under one umbrella organisation, we could share each others’ knowledge and expertise and could develop a uniform pattern.

The Tala-Vadya Kutcheris, an ensemble of 14 indigenous percussion instruments of Odisha that we conceptualised and staged during our annual Tala-Vadya Utsavs won accolades from commoners, connoisseurs, and critics equally. We also invited percussionists of Hindustani and Carnatic styles to our Utsavs that helped in the appreciation of our Odissi Mardal tradition.

We don’t come across female Mardal players. Is it not suitable for women to learn?

There are no restrictions for females to learn Mardal. In fact, female Odissi dancers keep learning it at times in order to understand the rhythm-patterns better. But being dancers, none of them focussed on mastering it. However, our Guru (Banamali Moharana) groomed and introduced both his grand-daughters as Mardal artistes. I too, have a disciple from Mumbai who has already staged a solo concert. 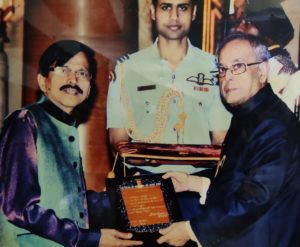 Perfect 10: When Odisha’s Debashish Mohanty Bagged All Wickets In An Innings

I Am On A Mission To Promote Mardal In Maharashtra, Says…